Anna Johnson Band has something special. 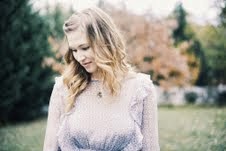 I was surfing Facebook one afternoon and came across a link featuring the Anna Johnson Band. I clicked on the link and immediately started to be drawn in. I found myself being pulled in by her wonderful vocals, lyrics and the harmony of the band.

As with anything that grabs my attention, I started searching to learn anything I could about Anna and her band. Since then I have become friends with Anna and her husband David. How inspiring to find a young couple following their dreams in Nashville while raising their little girl.

We recently attended Anna's CD release event here in Nashville. Her new CD "Here" is such a great example of music that is written well and composed in a way that keeps you interested. "Thief" is one of the songs on the album that really shows Anna's talent for telling a story without spelling it out word for word. She has an indescribable way of pulling you into the story. As a fellow songwriter, I appreciate this skill very much.

I recently spoke with Anna and asked her about her musical journey. She said her first guitar was her Dad's as she was raised up in a musical family. Her first song was written at a young age. After finally mustering the courage to play her new song for her parents she told me, " I was really shy about music at that point, but was really encouraged and reassured when they reacted positively to my writing. It was the start of something special, and I really had no idea."

She still has a shyness about her music, but it speaks for itself really. After they performed at my fundraiser, Phil's Jam for FSHD, I had so many people come up to me and say how flawless and wonderful their set was. I too was blown away at how perfect their sound was.

Out of High School, she won a full scholarship to McNally Smith College of Music in St. Paul, MN where she continued to hone her songwriting craft. The band Queen selected her as the winning recipient of the Queen Songwriting Scholarship after they heard her original song "Flowers on Monday." I included a Youtube.com link of her song, "Someday" with lyrics that sums up what Anna is all about. "Someday her dreams will come true, someday she'll sing them for you, someday you'll want to go too."

I believe in your dreams Anna. Keep up the good work.