Credit where credit is due. 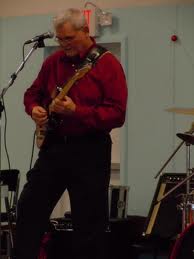 As some of you know, I grew up in a musical family. My Dad was a preacher and Mom was the piano player at our little church. They had us boys singing in church at a very young age. We even recorded an album when I was young. My Uncle Stormy played the guitar and sang with us. It was a great way to grow up.

This is when I fell in love with music and the GUITAR. He played a Martin D-28 and it was the first guitar I ever played. I actually remember forming my first chord. It was a D...then I learned the G and then the A. The love affair continues to this day.

The first song I ever learned to play was an old gospel song we used to perform, "Life's railway to Heaven". It took me months, but I learned the intro just like my Uncle Stormy played it. I used that same intro on my song, "I'll remember you" which I wrote for my Dad after he passed away in 1999. It was meant to be a tribute to my main musical influence growing up and to my Dad.
I taught myself to play the drums on my mother's tupperware when I was 12. I finally got my own set when I was 16. I praticed non-stop and got pretty good. When I was 18, my Uncle got me my first gig as a drummer. I am so grateful for him and the influence he had.

Through the years I was fortunate enough to perform a lot of music with my Uncle. I hope he knows how much it meant to be. Well today is Stormy Bennett's birthday and this is my way of wishing him a happy birthday. We haven't talked in a while, but I appreciate all you have done for me over the years.

Posted by PhilB No comments: