From Vince Gill to James Taylor... 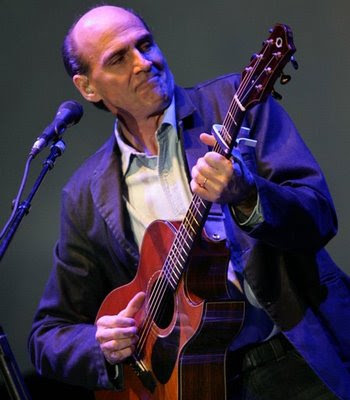 Well after seeing Vince Gill and friends at the Ryman last week, I thought my month was complete. It looks like we are going to see my other hero James Taylor at TPAC (Tennessee Performing Arts Center) next week. I have never seen James Taylor in concert before, although Kristi has. I did however meet him once.

I was working at a truck stop near Columbia, Missouri while I was attending Mizzou. I was working the late shift one night when I saw a tour bus pull in. They pulled to the diesel pumps which could only be seen through a crappy video camera. So I had no idea who it was. As I waited the anticipation was killing me. I knew it was someone famous.

So a few minutes later, in walks James Taylor. I was speechless. He asked where the payphones were...I told him and he walked on. A few minutes later about four guys walked in, so I struck up a conversation.

"That was James Taylor...right", I asked them. "And you guys are the band"?

I had to ask just to make sure I wasn't talking to some random travelers stopping in to annoy me. They said yes and we had a good conversation.

So, that's my brush with greatness and now I get to see him in concert here in Nashville. Life is grand!!!