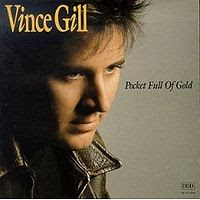 It's 1985 and I am heading to band practice. I'm trying to figure out what new songs I want to learn and questioning everything. Do I want to keep playing music, do I want to start singing more or just be a drummer and continue to sing back up for the rest of my life. At that point I really hadn't started writing music or figured out how to work my tenor voice into a set list that was filled with Merle Haggard and George Jones.

I turned the radio on to try and clear my mind. The first song I heard was "Oklahoma Borderline" by Vince Gill. It was like a light shined down from heaven. When I got to practice, I asked the guys if they had heard this new song and if they knew the artist. Somebody said it was a new guy named Vince Gill.

Well, from that day on I started following this new artist and with each album I fell more into his music. Over the years I have sang many of his songs and have been lucky enough to see him in concert a couple times. Last night was one of those lucky nights. Not only did I get to see my hero, but I got to watch him and his friends play in the historic Ryman Auditorium.

It was a magical night filled with old classic songs and new material. He featured some of his fellow songwriters and some new, young local guitar talent. He showcased his back-up singers (past and present), musicians, co writers, friends and his lovely daughter Jenny. His wife Amy Grant helped him close the show.

I found myself tearing up from the first song as I listened to the music that has meant so much to me over the years. Plus the way he gave the spotlight away to so many "unknown" artists was truly inspiring. I am not sure if it was the historic theatre or the spirits of all those who have sang on that wonderful stage, but I will always remember my very first concert at the Ryman. I hope there will be many more. It was truly one of the best concerts I have ever seen.

Thank you Vince and Friends,