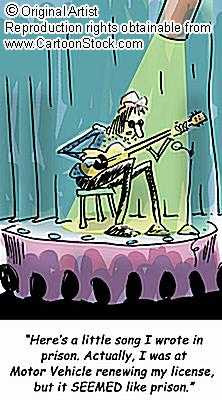 Anywhere outside of Nashville, it is easy to find someone to write with. Back in Missouri all I had to do was pick up the phone and I could write with anyone.

Oh how things are different here. I have been here for six years now and have had a several writing sessions. The first was with a couple guys that I met at a songwriter night. We got together and it was great. We wrote a song and it was pretty good...at least it was a start. Two weeks later, one of the guys moved back home to Illinois and the other decided co-writing wasn't for him. So, here I am left with nothing but an interesting evening. I didn't take it personal though.

Another co-writing experience was with a gal I worked with. We did very well and actually finished a few songs. We performed at a few songwriter nights together, until she decided not to show up one night. I was blown away...why in the world would she do that? Anyway, she was mainly an artist and had a few issues I guess. It made me look really bad, but I handled it.

My latest attempt at co-writing didn't even get to the session. I had seen this guy perform many times and we had become friends. I told him I would like to write with him and see what we could come up with. He seemed so interested...then nothing. We have talked about it several times...but still nothing. I can't even get a time set. He said, "Call me Thursday, we'll set a time." I called...voicemail and no return call as of a week ago. Frustrating!

Anyway, that's when I decided that finding a good co-writer is worse than finding your soul mate. Asking someone if they would like to write together is worse than asking them out for dinner. Plus, the rejection hurts worse. It's like getting the, "it's not you, it's me" routine.

I have decided that most writers here (as opposed to back home) have a shallow side and are more concerned with your connections than your catalog of songs. But I will vow this, when I get my cuts and my phone is ringing off the wall...I will write with unknown writers. I will not give them the, "I'm kinda seeing someone right now" routine. I will...I promise.

Peace and love to all you songwriters out there, I feel ya!

Posted by PhilB No comments: