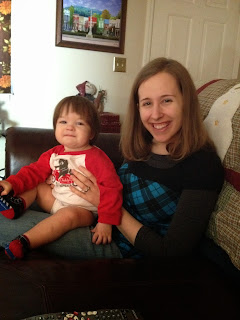 I want to share my most memorable Christmas ever.


It was December 25th, 1983 and it was about 17 degrees outside and snow was on the ground. It was about 3:00 pm. My wife and I were at my in-laws opening up presents when my wife felt this strange feeling. She took the present she was opening and laid it on the floor and ran to the bathroom only to find that her water had broke. She was huge and we were expecting the baby any day now.
We immediately gathered everything we needed and rushed to the hospital.We arrived and was escorted to the maternity wing of St. Mary's Hospital in St. Louis. We finally saw the doctor and he said we would probably have to induce labor since she wasn't having labor pains yet. So, they proceded to do just that. I'm told that induced labor is the hardest to endure, but my wife was a real trooper.
Slowly through the evening the pains started and got stronger and stronger. In between pains we listened to the Christmas music that the hospital had playing overhead and we also watched TV. Midnight came and went and so did the Christmas music.
In the wee hours of the morning, the doctor came in and checked saying we should go to the delivery room now. I dressed in scrubs for the first time in my life and met them there. As I held her hand and coached her as we had been taught in class, she finally pushed out a beautiful baby girl.
The nurse immediately cleaned her and wrapped her in a cotton blanket and handed her to me. I sat in the chair just beside the hospital bed and held her in my hands. Our eyes locked. She looked at me as if we were long, lost souls that hadn't been together in decades. Maybe that is the case. I could not take my eyes off of her and she was the same. We stared at each other for what seemed like eternity while the doctor finished with her Mother. I will never forget staring into those beautiful blue eyes, counting her fingers and toes and holding this precious angel I had just been given.
We named her Cagney Michelle and she turns 30 years old today, but I can still remember it like it was yesterday.
The day I was given an angel for Christmas.
Merry Christmas everyone!!
Posted by Unknown No comments: 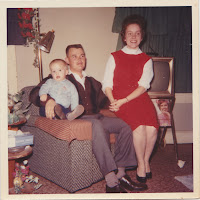 This is a picture of me sitting with my Mom and Dad. I was about a year old I think. I don't remember that early, but I will share a wonderful memory from when I was 4 years old. It would prove to be a monumental moment in my young life.

To this day, one of my favorite things to do is sing harmony. Singing in church with my family and singing in church choir helped me hone my harmony singing skills. I also was able to hear the parts at a very young age. I sang in a barbershop quartet in High School and vocal quartet in my 20's and 30's.

I have studied the great harmony singers and tried to emulate their style. One of my favorite singers is Vince Gill, but some people don't know that he is the most amazing harmony singer. Through the 90's and beyond, he has lent his harmony to thousands of recordings. I learned a lot from listening to him.

But I owe my love of harmony to my Mom and Dad and that wonderful Christmas.

Merry Christmas everyone!!! May your holiday be filled with harmony.